Pulmonary Embolism (PE) is a blockage in one of the pulmonary arteries in the lungs. In most of the cases it is caused by blood clots traveled from elsewhere in the body through the bloodstream.

Following are the major ECG/EKG changes for acute pulmonary embolism can be observed in any condition causing Acute Pulmonary Hypertension. This includes Hypoxia resulting in Pulmonary Hypoxic Vasoconstriction.

S1Q3T3 Pattern is called classic EKG pattern. It is also the ECG pattern known to residents and hospitalists all across this country as the boards type question for evidence of a pulmonary embolism.

What does S1Q3T3 mean? It is the triad of an S wave in lead one (the first down slope after the first upslope in the QRS complex) a Q wave in lead 3 (first down slope in lead 3) and T3 (or T-wave inversion in lead 3). The S1Q3T3 was first described In a 1935 JAMA paper by McGinn and White. Some things never change despite all our great technology these days.

Interestingly, despite all these pronounced findings of large central clot burden, this patient did not have hypoxemia. Their oxygen saturation was 97% on room air. The human body has the amazing ability to counteract extreme physiological circumstances. That's what makes the diagnosis of pulmonary embolism so elusive at times. If you aren't thinking about it in your differential diagnosis, you won't be able to treat it. 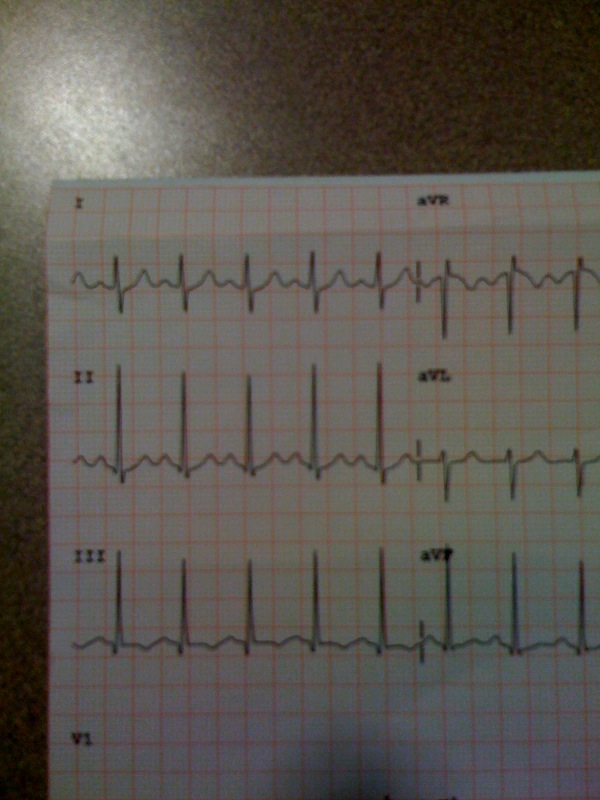 Pulmonary emboli can be deadly. Always keep PE in the back of your differential diagnosis in patients with unexplained syncope, unexplained pleural effusions. It's not every day when clinical practice presents such a classic presentation for EKG findings in pulmonary embolism. It makes all those years of medical school education worth while.

And then there is the case of syncope. Chief Complaint: I passed out. This patient was a young female on birth control pills. A V/Q scan confirmed the presence of bilateral pulmonary emboli. Her EKG also showed the classic S1Q3T3 changes one can see with pulmonary emboli.

The ECG changes described above are not unique to PE. A similar spectrum of ECG changes may be seen with any cause of acute or chronic cor pulmonale (i.e. any disease that causes right ventricular strain / hypertrophy due to hypoxic pulmonary vasoconstriction);