A+ A-
Print Email
Bone mineral density (BMD) is very important in terms of human health. People having trouble regarding bone pain or difficulties in movement are often recommended to do a bone mineral density test. It  can be measured with a variety of techniques in a variety of central or peripheral.  Central may include hip or spine sites and peripheral like wrist, finger, heel sites.

In today’s world of technology, everyday bring something new and more advance. So it can concluded that the above mentioned list of techniques may not be comprehensive. There was a time when SPA and DPA were the most trusted techniques to do so but now they are considered obsolete and rarely used. This article include a brief review of modern technologies for Bone Density DEXA Scan also. 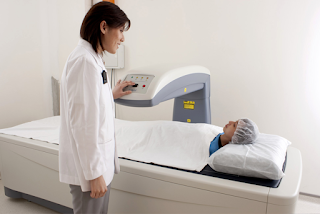 In terms of bone density Scan, following technologies are most commonly used:

DEXA stands for Dual Energy X-Ray Absorptiometry  and is considered one of the most advance and commonly used technique to measure bone mineral content and bone mineral density.  It is a two-dimensional projection system in which an X-ray tube source instead of  radioisotope  is used. This x-ray tube is used as a photon source.  It is used all around the globe as it provides more accurate and precise readings.  DEXA is used to measure bone mineral in both the peripheral appendicular skeleton and in axial skeletal sites, e.g., wrists, hip, spine, or total skeleton.

QCT stands for Quantitative Computed Tomography. It depends on the differential absorption of ionizing radiation by calcified tissue and is used for central measurements only.  Unlike  DEXA, QCT is less readily available and associated with relatively high radiation exposure and relatively high costs.

Ultrasound densitometry is a technique which is particularly used for measuring BMD at peripheral sites. One example of such sites is the heel, but it is not limited to such sites only. It is  also used for tibia and phalanges. In contrast with osteoporotic bone, normal bone demonstrates higher attenuation of the ultrasound wave, and is associated with a greater velocity of the wave passing through bone. The best thing about ultrasound densitometry is that it has no radiation exposure, and machines may be purchased for use in an office setting.

DEXA scan as mentioned above,  is currently the most widely used test in measuring bone mineral density. It is an important test in assessing the degree of bone thinning in osteoporosis. Bone loss increases the risk of hip as well as  spine fractures.

A DEXA scan is highly recommended for women over age 65, as well as for women that are post menopausal, or those individuals who have suffered certain types or frequent bone fractures.  Persons with  family history of osteoporosis is advised to do that scan also. Just like women in menopause stage,  aged men with low estrogen are also at risk for broken bones.

Earlier in 2014, CPT code used for this procedure were 77080 and 77081. CPT Code 77080 was mainly used for bone density scan of axial bones like hips and spine while 77081 was used to code axial bone like wrist, radius and heel etc. These codes were deleted in 2015 and two new codes were introduced for DEXA scan. These CPT Codes will include the old codes. The new codes are:

Medicare covers DEXA bone mass measurement once every 2 years on a person who falls into any one of following categories: