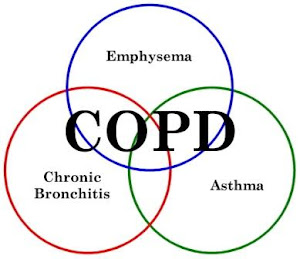 Asthma with COPD is classified to code 493.2x. However, all coding directives in the Tabular List and index need to be reviewed to ensure appropriate code assignment. A fifth-digit sub classification is needed to identify the presence of status asthmaticus or exacerbation.

Exacerbation is defined as a decompensation of a chronic condition. It is also defined as an increased severity of asthma symptoms, such as wheezing and shortness of breath. Although an infection can trigger it, an exacerbation is not the same as an infection superimposed on a chronic condition. Status asthmaticus is a continuous obstructive asthmatic state unrelieved after initial therapy measures.

COPD with exacerbation is classified to code 491.21, which also includes the following:
The word Acute need not be documented to assign code 491.21 for exacerbation of COPD (AHA Coding Clinic for ICD-9-CM, 2002, third quarter, page 18).

When the acute exacerbation of COPD is clearly identified, it is the condition that will be designated as the principal diagnosis. (AHA Coding Clinic for ICD-9-CM, 1988, third quarter, pages 5-6).

Coding and sequencing for COPD are dependent on the physician documentation in the medical record and application of the Official Coding Guidelines for inpatient care.

After diagnosis, the most important and effective treatment for COPD is smoking cessation. The benefits of quitting smoking apply regardless of age, amount smoked, or severity of COPD.

In addition to medications, patients may require home oxygen, pulmonary rehab to improve overall quality of life and, in severe cases, surgery such as a lung transplant or lung volume reduction, during which the physician removes small wedges of damaged tissue.