What is CPT Modifier 59 for Medicare Billing

A+ A-
Print Email
The Medicare National Correct Coding Initiative (NCCI) includes Procedure-to-Procedure edits and they are very helpful in some particular situation. These edits define when two Healthcare Common Procedure Coding System (HCPCS) should not be reported together either in all situations or in most situations. For PTP edits that have a Correct Coding Modifier Indicator of 0, the codes should never be reported together by the same provider for the same beneficiary on the same date of service.

So it’s important that procedures should be separately reported because If they are reported on the same date of service, the column one code is eligible for payment and the column two code is denied. But there are some defined circumstances, when the codes may be reported together which are identified on the claim by the use of specific NCCI-associated modifiers. One of the main functions of NCCI is to prevent payment for codes that report overlapping services. As discussed there are some exceptions where the services are separate and distinct.

It is important to verify whether the services are bundled through CCI, before submitting this modifier. Code pairs with indicator 0 in the CCI list cannot be submitted separately for reimbursement under any circumstances. While code pairs identified with indicator 1 may be submitted separately for reimbursement if the two services are performed in a different session or patient encounter, different procedure or surgery, different site or organ system, separate incision/excision, separate lesion, or separate injury. 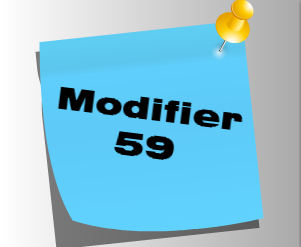 Under certain circumstances, the physician must indicate that a procedure or service was distinct or independent from other non-E/M services performed on the same day. Modifier 59 is one of few modifiers that are often used incorrectly. Following are some appropriate as well as inappropriate situations in which Modifier 59 is being used.